All-Con 2013: Have You Ever Wondered What Monopoly Would Be Like If It Was Fun?

So if you were wondering what that cash-clutching baby in the top hat was all about (and what it had to do with the JediCole Universe) then your answer is now here.  As part of ongoing, cross-website pre-show coverage of All-Con 2013, the following is an explanation and more. 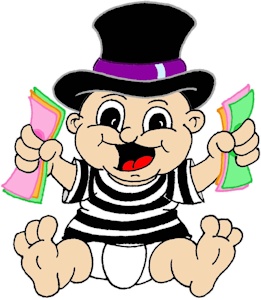 This intrepid little fellow is the official mascot for Life Isn’t Fair Monopoly, a variation on the game created by Mrs. JediCole nearly a decade ago.  After thorough play-testing it was brought to All-Con 2007 with scheduled open play on Friday night.  While the game attracted only a handful of players the first night, word of mouth insured a much larger group the next night.  And while there was nothing scheduled for Sunday, she was tracked down by some of her repeat players and an impromptu game was played at the hotel bar!

Needless to say, Life Isn’t Fair Monopoly has been a much-anticipated aspect of All-Con ever since.  With such elements as Welfare, dependant children, and a lottery, this truly is Monopoly if it was fun to play.  Each player starts the game with property and going to jail has a few twists of its own, including potentially framing another player!  You can go from rags to riches to rags during the course of a game of LIF Monopoly, something that would never happen in traditional game play. 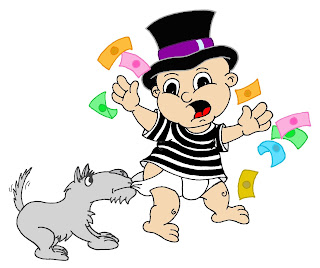 If you are attending All-Con 2013, be sure to be a part of this long running tradition.  Mrs. JediCole will be hosting up to three separate boards (Veteran Player and New Player boards plus one additional as back up should the crowd exceed last year’s turn-out) on Friday and Saturday night.  Be sure to sign up each day as there are only eight players per board each night and those chairs fill up quickly.

*Life Isn’t Fair Monopoly is open to all paid attendees of All-Con 2013 (up to 24 players over three boards).  Preregistration on the sign up sheet outside the Maple Room is highly recommended.  Unclaimed chairs will be filled on a first-come, first-served basis.
Posted by JediCole at 10:00 AM